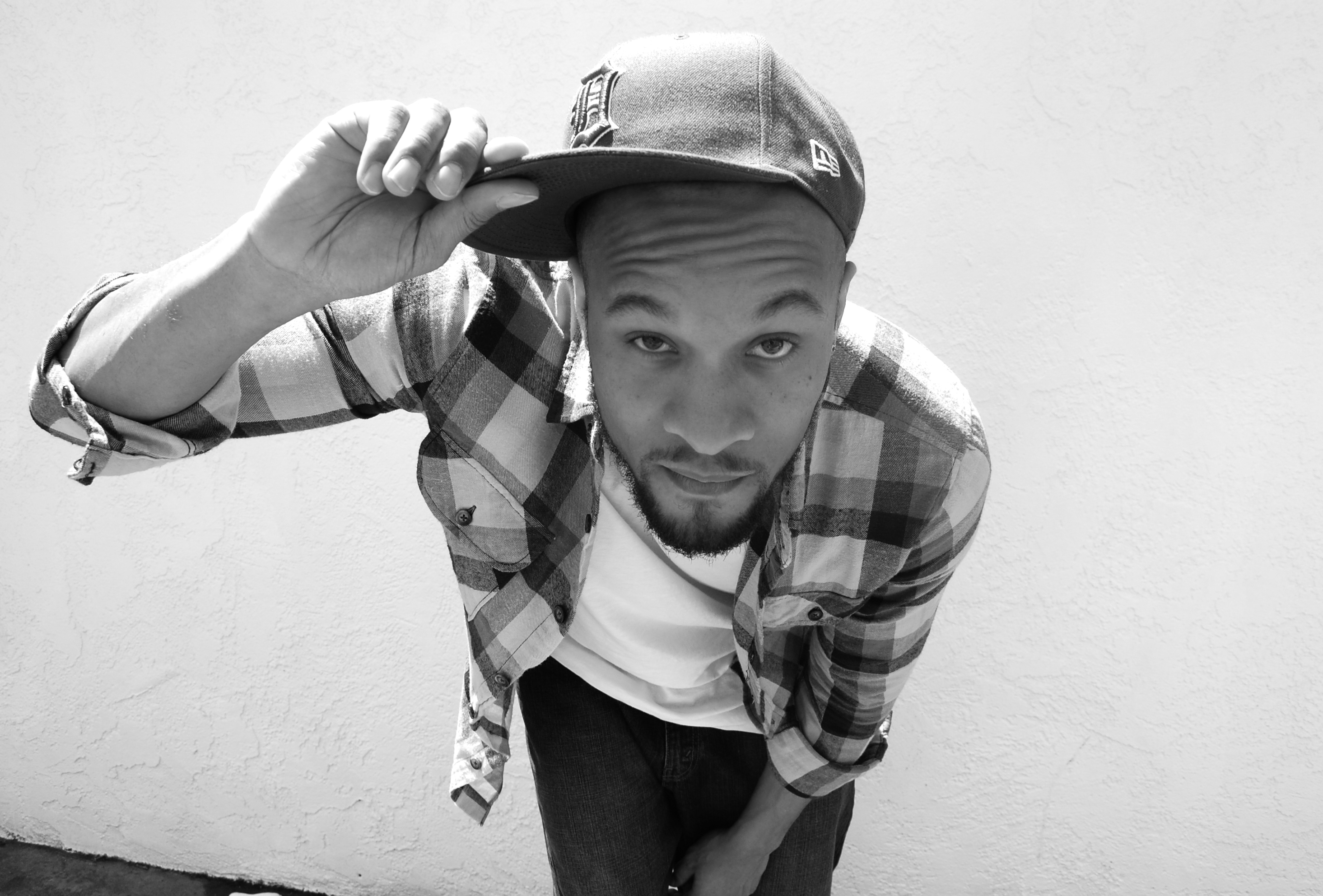 You come from a small town Ypsilanti in Michigan. Was it hard to establish your name on the scene due to the fact that you are not directly from Detroit? Because I don´t suppose that Ypsilanti has a fanbase big enough to make you famous.
Not really. This is due to the fact that most people outside of Michigan immediately assume that you represent the Detroit music scene. Ypsilanti is basically part of the metro-detroit area so basically it´s all in the same to me, as far as music goes. Having a fanbase in Ypsilanti is not big enough to make you famous and from the style of music that I make, having a fanbase in Detroit isn´t big enough either.

“The Golden Hour” and “Nowalataz LP” were mostly instrumental albums. Do you plan to record a production album with many guests in the future?

I´ve planned records with many guests on it before, but it never seems to work out for me because it becomes too hectic to coordinate. Maybe ill be able to in the future. However, I do have a few full length albums with different artists that I am working on a more one-on-one level that people will love when they hear it.

If you could make an album with any of your favorite rappers, who would it be and why?

You were also rapping at the start of your career. Do you still like to get on the mic now, or you just want to stick to producing?

Definitely! I LOVE producing more than rhyming, but rhyming will always be in my heart so you will definitely hear me on the mic more in my upcoming projects.

The album “Nowalataz LP” is heavily affected by J Dilla´s passing and most beats were recorded shortly after his death. How did you decide that the right time to put out the album is now?

Well, It´s been a project i´ve been sitting on for years. All of my albums are like pages of a diary to me. “Nowalataz” was definitely a diary page of my life and as far as being an artist, I felt like I wasn´t doing my job If I was sitting on a project instead of sharing it with my fans and friends. So I decided to put it out. I had to wait for a while because I didn´t want people to think that I was capitalizing off Dilla´s life and style, so I wanted to drop it In a special way and when people least expected it and that´s what I did.

How strong influence did Dilla have on you before his death and now?

Dilla had a HUGE influence on me. I have been listening to constantly since around 98´ when I first heard “Players” off Slum Village “Fanatic Vol.1”. I knew his work on Busta´s 1st album, Pharcyde and A Tribe Called Quest, but I didn´t know he was from Detroit until Slum Village. Once I found that out, that gave me so much inspiration to see someone from around the way getting shine for their own unique art of a large scale. Since then I STUDIED that dude. I mean, I studied the way he equalized his kicks, snares and everything. Even made charts based on frequencies, because I was so intriqued by his genius.

Right now you are on tour with Mayer Hawthorne and Buff1. With you and Buff 1 being the supporting acts, do you think that Mayer´s current popularity will bring you new fans?

Not sure If I will gain new fans because Mayer Hawthorne´s style is different from mine, but since he is part of my Athletic Mic League /Lab Techs and A-Side Worldwide family, it will definitely make more people aware of my existence, which is a blessing!!

Do you produce for people outside Michigan and A-Side Worldwide?

What´s your opinion about sampling vs. composing? Do you prefer the traditional method of finding samples on old records, or you rather compose the music yourself, using instruments?

I´m in love with both. It still amazes me how a person can take a sample and turn it into something that can change your life so sampling will always be my love. However, as you grow as a musician/artist. the more you want to compose your own original music. That´s the mindstate i´ve been in for the last 6 years. You´ll hear me playing more of my own instruments and working with other musicians more on my next album.

What are you currently working on?

Currently working on my next album, “Iamabeenie: The Opposite of Pink”, and full-length albums with Othello, AB, and beginning the new Athletic Mic League record as well.

You have 2 diplomas hanging in your studio. What exactly have you studied? Is it important for you to know that if you can´t make living off music, you still have education and qualification for a good job?

One diploma is a Recording Engineer Certification. The other diploma is from Eastern Michigan University in Business Administration. I think it´s more important to never stop learning. Most artists struggle with making a living off music so you have to be educated in other things to take care of yourself in this world.

Your music is based on the traditional Motown sound, but what about the fact that techno was created in Detroit? Did techno have any influence on you?

Well, you always heard Techno or forms of Techno in Michigan so it was Impossible to not be influenced by it. The whole Techno to Ghettotech (Booty Music) to House music was BIG on the radio when I was growing up so you will heard that influence in my music as well. On my first album, “The Golden Hour”, you can hear the techno Influence in the first track. Cyborg- “Clear” is also one of my favorite all time records cause it represents Detroit to me.

Social networks like Myspace or Facebook are a good way to gain fans outside the States. Do you aspire to built a worldwise fanbase, or are you aiming primarily at the US fans?

Worldwide! How can you be an artist and not want to take advantage of the fact that through social networks, you can gain fans in France or Japan! It´s amazing to me, so I try to take advantage of it as much as I can. It´s crazy when people In Poland know about music from Ann Arbor/Ypsilanti.

You and A-Side Worldwide have been on tour in Europe. How are you satisfied with it? We visited your show in Dresden, which had much smaller attendance than you deserved. How do you deal with playing for very small crowds?

Im very satisfied with the shows we done in Europe. As a small, up-in-coming, independent artist, It´s all a part of the process of building a fanbase. I´ve been performing for small crowds most of my career, but I also have faith in good music and word of mouth so next time we perform in Europe, hopefully the crowd will be twice as big.

Do you see any difference between US and European fans?

Yeah, I think that US fans are spoiled in a sense. They have an abundance of access to artists´ music and performances that they can be less appreciative of it. However, in Europe, artists don´t perform nearly as much as they do in the US, so when a US artist comes to Europe, Europe fans take advantage of it and support as much as they can. Also, in many instance overseas, not everyone can spend hours on the internet downloading and listening to music as US fans do.

AML new album Is in the works as we speak. In the meantime, you will continue to get projects from myself, Buff1, Tres Styles, Mayor Hawthorne, and Vaughan T to hold ya´ll down!

Do you watch new talented producers from Michican? Have you noticed any new name that we should look out for? For example, I´ve recently started liking what Daru Jones is doing.

Hmm..new producers from Michigan..who are the old ones? I like cats like Illingsworth, Apollo Brown, and Denmark Vessey..there´s so many tho..

I just want to thank everyone who took time out to read this. Thank you for supporting my projects “The Golden Hour” and “Nowalataz” and continue to support my Asideworldwide family! We REALLY appreciate it! www.asideworldwide.com. God is always GOOD.