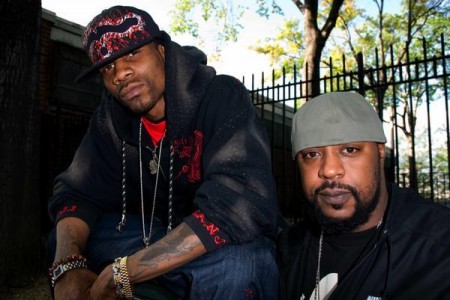 You have known each other since forever. Can you share some funny stories from your childhood? What was it like growing up together?

Sean Price: We were actually the good kids growing up. DJ Logic who runs with Boot Camp Clik and Smif N Wessun was the bully. It wasnt until we hit growth spurts that we decided it was time to stand and throw down before steering clear of confrontations. I remember housing Rock in basketball games though. With all his height he should have been better. (laughs)
Rock: I actually saw Sean Price first rhyming at a MC Battle. Everyone else was horrible and I was on my way out. Then I heard son rhyming and it stopped me in my tracks. I guess it is not all that funny, but he was saying some funny shit on stage. (laughs)

You already talked about the album on tour in 2004. You even had a title back then. How come it took so long time to get the album out?
Sean Price:  I was busy working on my solo projects at the time “Monkey Barz” which eventually led to the Master P mixtape and then “Jesus Price Supastar”. The timing just wasnt right. It enabled me to build a genuine fan base that wanted to hear what Sean Price had to say. I think in the end it helped to better set up this Heltah Skeltah project.

BCC have done a lot of collabos with 9th Wonder lately, but he has no beat on this album. Have you even reached out to him?
Sean Price: 9th Wonder is the truth and I love his work. We just didnt call on him for a beat for this project. Khrysis who is in a similar vibe as 9th Wonder contributed a lot to the album.
Rock: I wish we did get 9th on the record, but there are no regrets. We made a classic album that will be talked about. I got to record rhymes over 9ths work on Boot Camp Cliks “Casualties of War” album. That was fun.

Evidence is the only West Coast producer on the album. How did the collabo come about and did you think of letting him do a verse?
Sean Price: EV and I are real close. I was on tour last Spring with Jedi Mind Tricks and bought his album (The Weatherman LP) the day it came out. We always stayed informed on each others movements and when the Heltah Skeltah album started production, I knew I had to hit him.
Rock:  Evidence produced a bunch of fire and it was an easy choice to add one of his tracks into the mix. We didnt feel it was necessary to actually put him on the record though. There are very few features and  we did that on purpose. Too many rappers feel the need to crowd their albums with OTHER RAPPERS, but I think that is because they feel they cant carry an entire album by themselves. If your fans are going out  to buy YOUR album, I hope they should get exactly that, and not have  to sit through thousands of verses from other dudes. We got our Duck Down family on the record, but beside that its strictly RUCK N ROCK.

Some of the lines you are spitting in “The Art of Disrespektinazation” are really funny. How did you come up with the concept of the track?
Sean Price: We smoked some disrespectful weed and felt the need to vent. (laughs) Its all in fun. Anything we say is because we are two fools rocking some leather fatigues. Bottom line is this shit is entertainment and we have a good time doing just that.
Rock:  A lot of times it is just because these artists names just rhyme to well when lined up against some disrespectful shit.

How long will fans have to wait for the fourth Heltah Skeltah album?
Sean Price: A long time.
Rock: (laughs) Another ten years maybe?

Sean, “Monkey Barz” and “Jesus Price Supastar” are similar, which  is good, because they both are dope. What can we expect from “Mic Tyson”?
Sean Price: More of the same. Iam not going to reinvent the wheel. Expect good production, witty word play and a straight FUCK YOU  mentality. People always wonder what Sean Price is going to say next……..

Sean, Do you still want to make “Mic Tyson” your last album? What is the reason behind that?
Sean Price: Not sure. Ill tell you after Mic Tyson drops.

Sean, Besides the Random Axe project, you also have an album  with Ill Bill in works. What made you guys do a whole album together?
Sean Price: We are on the road now with my man Ruste Juxx for a 54-City Tour. Ill Bill can rhyme his ass off. Figure if you put a politically in-tune white dude who isnt afraid to make a track called white nigger, together with an ignorant fool like myself, we could end up with some real serious shit. (laughs)  I guess that is why we are calling it “The Pill”.

Sean, You are the executive producer on Ruste Juxx album.  Tell us something about it. What exactly are you taking care of?
Sean Price: I am really just putting my stamp of approval on this project. Ruste Juxx is a viscous artist and he is been collaborating with Duck Down and BCC releases for some time now. This industry is funny and sometimes doesnt want to welcome in a newcomer. I can help speed that process up a bit by using whatever pull I have in this industry to help  Ruste Juxx. His rhymes will do the rest. If son couldnt rhyme, I wouldnt even let him touch a record of mine, let alone allow my name to be on his album cover.

After the critical success of Seans albums, have you ever received an offer from a major label? Would you i.e. go to Def Jam if theytried to sign you?
Sean Price: There were some talks coming from Def Jam and even SRC, but all of those still involved remaining with Duck Down and still using their system to promote what I do. I would never leave, because they understand how to market me as an artist and what my fans are interested in seeing from me. It is a good chemistry and I amm happy. Plus those dudes at Duck Down are about their money. If you have a name and are looking for the right situation, holler at these dudes. They will support your movement.

Rock, any news about the “attempted murder case that they gave you”?
Rock: Yes, Rock is not guilty! I am out on bail right now and I am just going through the motions. Nothing too specific to speak on.

Do you still hang out with other Boot Camp Clik members regularly, or do you mostly meet in the studio?
Rock:  That is family. We are always hanging out and if it is not at  the studio then it is in Brooklyn or at events in NYC.

Many hardcore rappers get soft as they get older, but you guys still  make that raw hip-hop. What do you think is the reason for that?
Sean Price: I think it is in the water we drink. Nah, for me R&B your way through the album. You can mature as an artist, but it  shouldnt change your delivery or the content you speak about. I  still live in the hood, so there is nothing more raw than that.
Rock:  It is the only style of rap I know. PERIOD

Whats your favourite rhyme of each other?
Sean Price: On the new album Rock says: “Patience aint only a virtue, Thats you and your manz at the hospital, I will hurt you, beat you out your shirt and your shoes, punch your chin off, or the pound put your face on your chest like Rick Ross!” That line is  awesome!
Rock: Too many from son to choose from, but I love: “Big Drama, Lil Drama, lip gloss stains on my dick from Lil Mama. When I Fuck Rihanna I aint use no umbrella, when the bitch have twins we naming them both ela ela, I am just joking, maybe I am not. I am just smoking, maybe it is pot, maybe it is coke, maybe it is both, ony way to tell, mother fucker, take it and toke.” (lauuuughs)