DWELE: Tell your lady how you feel thru a song 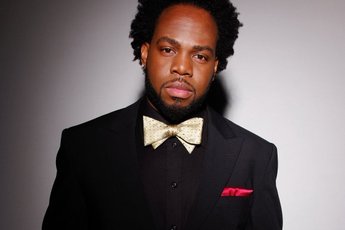 What do you think are the main differences between “Sketches of the Man” and “W.W.W”?
I feel like Sketches had more of a hip hop feel to it. Certain songs on WWW have that feel, but there are still so many different vibes on that album. I feel like it´s a blend of Subject, Some Kinda and Sketches, all in one.

Do you still feel you can artistically evolve after spending so many years on the scene?
I think once you stop evolving and trying different things, it´s time to stop period and try something else.  I´m still having fun musically, and there are a lot of different genres I haven´t really touched publically yet, So there is still fun to have.

Your new record has been in stores for only a few days. If someone who doesn´t know your music well read this interview, how would you convince him to buy your record in a few sentences?
All purpose music for your life. The soundtrack to your life. The audio Hallmark, tell your lady how you feel thru a song. haha

Which song from your new album and why would you like:
…to be played by DJs in clubs? I Wanna – c´mon, DJ Quick is on it!
…to hear in the prime time on MTV? Smoke Up The Back. It´s a broken down track, perfect for backdrop music on a reality tv show.
…which one is your favourite? One of my favorites is I Understand. I think every singer/musician has a “baby” on the album, that one is mine.
…which one took the most time to be made? Dim The Lights. That was my first time playing a Vocoder, took forever to get it right.
…which one would you never play for your girlfriend? She A Star. I can see it now: ” that better be about me!”.

I´ve read that there shouldn´t have been any guest features on “W.W.W” so that the listeners could fully enjoy you as an artist. In the end there are a few guests there. Were you trying to avoid monotony by featuring them?
I´ve never really had too many guests on previous albums because I wanted people to know who I was as an artist, I didn´t want to confuse people. But after 3 albums that way, I felt it was time to do something different, and I think it brought a great feel to the album.

I wasn´t able to find how many records you´ve sold. Do you actually care about album sales? Would you ever stop making music because of low income it could generate for you?
Of course I care about album sells, I can´t see an artist not caring about it. But at the end of the day, it´s more important to me to put out a creatively fulfilling album. If making music meant that ends wouldn´t meet then I would probably try something different, but right now “I´m Good” (in my clipse voice).

In the mid 90´s you were still rapping and you only started singing after that period. Do you plan on recording more songs you´d rap on?
That´s really something I just play around with, with some of my friends at home when the drinks are flowin! haha. I played with it a little on this album for fun, who knows, I might do more in the future.

Detroit is mostly known for its hip-hop scene, there aren´t many known nu-soul and RnB singers like you there. Could you recommend us any upcoming nu-soul/RnB artists?
L´Renee great, jazz/soul singer. She has effortlessly velvet vocals.  J tait ,my background singer is really creating a buzz right now, think Sam Cooke meets HipHop meets 2010. Monica Blaire, featured on W.W.W. the W.orld section on Detroit Sunrise. Strong vocals crazy range, and one of the best live shows I´ve ever seen.

How has J Dilla inspired you? What was it like working with him?
Dilla was a talented musician, producer, friend, just an all around great person.  He taught me a lot on the MPC, and had an answer for anything music related. he was a perfectionist in the studio.

What are the origins of this collaboration? Do you remember your first encounter?
The first time we collaborated was on the remix to Hold On off of the first album Subject.  Since then we worked via Common on The People, then again with Flashing Lights, and recently on the single Power from his new album.

Is it anyhow comparable to meeting and working with Dilla or Common?
No, I feel they are all different artists with different ways of getting to the same ending, a hot song!

What happened to The Breakfast Club project formed by you, Elzhi and others?
I think everyone just kinda went their own way.  As far as I know, everybody is still working within music, and yes there has been talk of a reunion, it´s just harder now cause everybody is somewhere different at any given time.

Are you planning on touring Europe with your new record? Lots of your fans would be really happy to be able to see you live.
I do plan on getting back to the other side of the pond , UK/Europe, I think it´ll happen in February.

Thank you very much for the interview. Would you like to add anything before we wrap this up? Some wise speech or greetings?
I appreciate everyone that´s supported, get the latest installment of the soundtrack for your life.  Questions, comments, you know how to find me.  Twitter – @therealdwele, Facebook- search Dwele, Myspace.com/dwele,  dwele.com, youtube.com/dwele24 for tour, music and just plain fun videos! Much love, see you soon my peoples