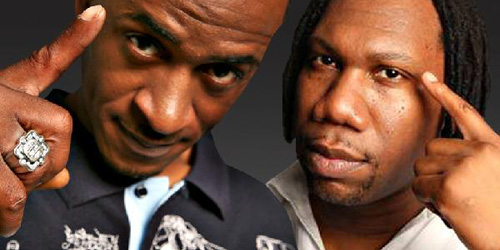 You both have been on the scene for more than 15 and 20 years respectively. What´s your secret to have a long career and stay relevant?
KRS-One: It´s about believing that the public is going to have interest in your product. There is no secret beyond hard work and a pure love for creating the music.
Buckshot: A good team. Have people around you that can support you in ways that you need a boost.

Is this the reason that you named the album „Survival Skills“? That you survived such a long period in hip-hop thanks to your skills?
KRS-One: People are out of work. The economy is suffering, the music industry is hurting. It takes a formula to survive in these times.
Buckshot: We all learn from one another. KRS-One & I have been doing this for over 35 years combined. That is true experience and knowledge to preach what it takes.

When and how did you get the idea to make a collabo album?
KRS-One: We kept passing one another like ships in the night. It was only a matter of time. I´ve know Buckshot since the days of Nervous in 1993.
Buckshot: We´ve recently been doing more shows together. If chemistry can exist on that stage in front of the live audience you know it´s only a matter of time before an album needs to be recorded.

Evil Dee told us that you recorded the whole LP in 2 days, so was is more of a spontaneous project?
KRS-One: It may have felt like 2 days of work, but the album took longer than that.
Buckshot: We got about 4 songs done in two days. We worked efficiently because we´re veterans. The album took some time to complete though. We had to make sure it sounded right.

You allegedly recorded the LP a year ago. Why didn´t you decide to release it sooner than now?
Buckshot: The timing had to be right and we wanted to get the right features on the album. We were able to secure talent like Mary J Blige, Talib Kweli, Immortal Technique, K´Naan, Pharoahe Monch, Bounty Killer, Melanie Fiona and more. That is a true accomplishment in the indie space.

Evil Dee also said he made some beats for you but it was too late. Do you have something like a storage of leftover beats at Duck Down?
Buckshot: We selected the beats within the first 2 meetings on the project. It was important for us to agree on that beat selection from an early standpoint.

You are both established solo artists. Did you have to make a lot of compromises during the recording process? Was there a moment when you couldn´t agree on something?
KRS-One: NO! Buckshot and I got things together very well. We traded off on concepts, hooks, flow, etc. It was a pleasure working with him.

How did you manage to get Mary J Blige on the album? Was it a random meeting where you asked her for a collabo, or did you plan to invite her from the beginning?
Buckshot: It´s actually an ironic story. I´m close with Mary J Blige´s trainer and he called me up one day saying: Buckshot, Mary J Blige just purchased your last album with 9th Wonder, The Formula, and it´s all she works out to. When our team got wind of this we contacted her manager and husband and established some contact. Next thing we know she invited us to studio where we made sure to present the idea of jumping on our track „The Way I Live“. At the time she was recording the theme track to the recent Tyler Perry movie which she´s starring in and she took a break from her recording of that to lay down the hook and bridge to our track. It was a true blessing. Mary is a genius on that mic.

If you had an unlimited budget for this album, what guests would you invite?
KRS-One: I wouldn´t change a thing. Have you seen the guests on this album?

How much do you care about album sales? Do you have an idea of how many copies of „Survival Skills“ would you like to sell?
Buckshot: Sales keep Duck Down alive, so it´s important, but I´d rather focus on the quality of the music. Fans will discover it one way or another, even if it means they´re not going to spend their $9.99 on it because they can download it for free.

Buck: Correct me if I´m wrong, but I think you or Black Moon have never been dissed by some other rapper. How would you explain it?
Buckshot: I´m every rapper´s favorite rapper.

Buck: How many people work for Duckdown Records? What is actually your job on the label?
Buckshot: When a project is in full motion we have roughly 20 people working it. My job is 24/7. I´m the ambassador for Duck Down, but much praise needs to go out to true generals like Dru Ha & NoHa who maintain the pure execution.

Buck: Who else would you like to sign? Are you negotiating with some new artists right now?
Buckshot: We have a bunch of contracts in the works, but unfortunately nothing I can discuss yet.

Buck: You have recently made uncomplimentary comments towards Rock The Bells´ organisers. What was the problem and have you already cleared it up?
Buckshot: I got that matter corrected with Guerilla Union. They are here to support the culture. There was just some confusion from what was being advertised to the fan about the structure of the festival, and I hate for the fans to be misconstrued.

KRS: When can we expect another solo album from you and do you also plan to release it on Duckdown?
KRS-One: If Duck Down is willing to allow me to release it on their label I´m with it. I´m ready to record a second album with Buckshot!

There are a lot of upcoming MC´s on the scene right now. Do you watch the young talents and do you have a favorite among them, someone who you expect to have a long career like you?
KRS-One: I´m a big fan of Skyzoo!

What´s your opinion on Twitter? Do you think it can surpass the success and popularity that Myspace had a couple of years back?
KRS-One: Yes. Twitter is a craze, but with people´s short attention spans, I´m certain the concept will remain for a few years, until someone comes up with the video version.

Anything else you´d like to say to our readers?
KRS-One: Thanks for all the support. From NY to the Czech Republic, the boogie down bronx is repping World Wide!