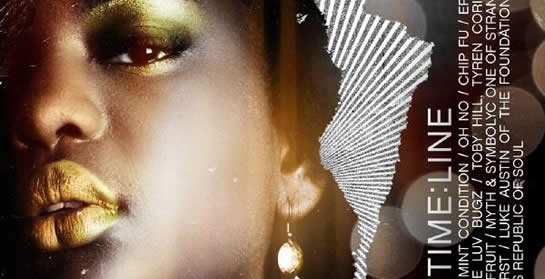 There is a dual evolution at work in “TIME:LINE”. Lyrically, it is the loose story of one person’s life, taking the listener from birth through the ups and downs of life, to death, and then on to the afterlife. Musically, Nicolay matches Kay’s narrative with tracks that evoke different eras over the course of the album. His production provides the soundtrack for the narrator’s life. Beginning with a reverb soaked 60’s wall of sound, the album progresses to a 70’s funky party vibe, a cold and crisp 80’s electronic feel and finally to Nicolay’s signature millennial sound.

What made you guys decide to record an album together? Was is because you had a good chemistry on the Nicolay’s album?
Nicolay: Yeah, it pretty much came around to us feeling really comfortable working together and ‘My Story’ was a track that we got a lot of love for, so at that point we pretty much decided to just keep it going.

The album has a very original concept. How did you come up with the idea? Was it your plan from the start or did the idea arise during the recording process?
N: Kay came up with the concept, so he’ll explain that.

Kay: I like having some kind of concept to guide my writing. It allowed our brainstorming session to have more focus. When Nicolay sent me the tracks, they touched on many timeframes. Before I began writing I thought It would be cool to write a project that spanned over the many different time periods that I heard in Nicolay’s music. That Is how we came up with the concept.

Did you record the album together in the studio or did you make the album in Foreign Exchange style – through the internet?
N: We did 90% over the internet, and when we were more or less ready to start wrapping it up, we got together in my studio here in Wilmington, NC to dot the ‘i’s.

Nicolay, “TIME:LINE” is the first release on your own label Nicolay Music. What’s next for the label?
N: It’s too early to tell. Right now we are 100% focussed on TIME:LINE and spreading it as much as possible. I haven’t decided yet what the next project will be.

Do you still follow Dutch hip-hop scene and artists like Pete Philly?
N: Every now and then, but it’s pretty much impossible being over here. I do generally check for people like Pete and labels like Appletree Records.

What advice would you give to producers who are successful in their country and want to break through the international scene?
N: Be and stay yourself.

Do you only work with artists you know? Would you sell a beat to someone you have never heard of?
N: Let’s put it this way, I wouldn’t sell a beat to someone I’m not really feeling. There’s been occasions where that may have happened in the past, just trying to come up with rent money and stuff, but right now if I’m not feeling the artist or not familiar with them….. no, thanks.

You told us more than a year ago that you were working on the second Foreign Exchange album. What progress have you made since then? Are you already recording?
N: We are still working on it. I’d say we are about 75% done and I’d love to see it out somewhere at the end of summer of this year.

You worked with German rapper Curse on his new album and you were also on tour with him. How did the collaboration come about?
N: Our mutual friend and business partner Gotz ‘GG’ Gottschalk introduced us to each other. At first I didn’t really know what to think since Curse rhymes in German, but it was clear that he was real talented when it comes to flow, and lyrics.

Kay, a lot of people first heard you on a Nicolay track. What did you do before that and when did you actually start rapping?
Kay: I started around ’93 In a group called Example with my friend DJ Cipher.

In the 90’s, the most famous artists representing Houston rap were Geto Boys and UGK. It seems that their music hasn’t really influenced your style. Have you ever been their fan?
Kay: Yes most definitely, I actually recorded a song with Bun-B around ’96. The Geto boys and UGK are pioneers for Houston Hip Hop, we all support them.

I read that you never write your lyrics down and use your own form of shorthand as a tool to remember. What does it look like? Do you write down only the most important points of each verse?
Kay: Actually I do write my lyrics down. I freestyle for a while and once I say something that I like I either write it down or record it so i don’t forget.

You are “dancing with the stars” at the end of the album’s story. Do you believe in after-life?
Kay: Yes I do.

What’s up with your group The Foundation? Do you plan to record some new material?
Kay: Hopefully soon. We recorded an album last year for Rawkus called Behind the Music. it was a digital only release.